The New Dynamic chooses a better editing experience for their clients 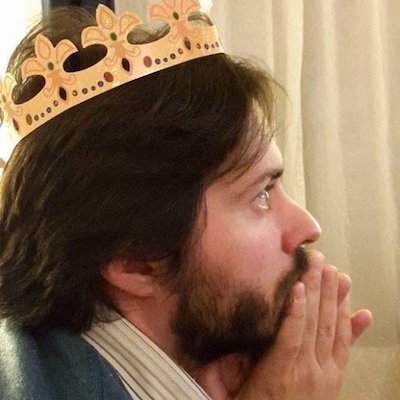 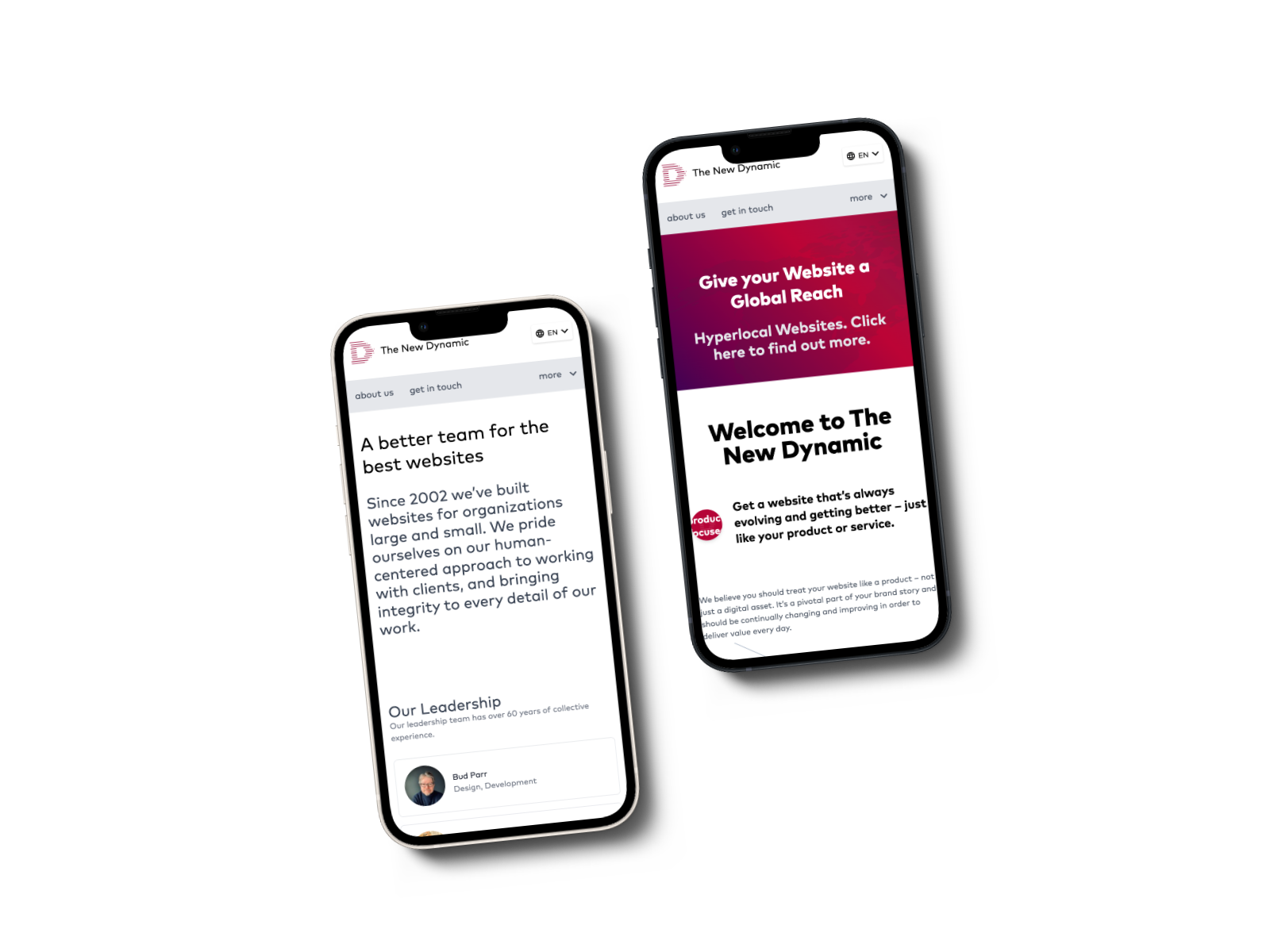 Web development agency The New Dynamic (tND) has a wealth of experience in the Jamstack world, building websites for organizations large and small. With over 60 years of collective experience in their leadership team, it’s safe to say that tND knows static sites inside and out — as well as the services that help site owners efficiently edit and create new content.

Lead Developer Régis Philibert is currently helping guide tND’s transition to a new content management system for their clients with existing Jamstack sites, and has been using CloudCannon for several months. After thoroughly testing the visual CMS, he's already come to a conclusion: for clients who want to upload and edit their own content, and for developers working with SSGs, “CloudCannon is going to be a better experience” than competing tools.

Why would a successful agency bring their clients to a new content management system? And why CloudCannon? Well, tND is always looking for the best tools, particularly those directly used by their clients. After investigating CloudCannon, both Régis and tND founder Bud Parr felt it was time to transition to a new Git-based CMS. And CloudCannon developers work closely with tND, too — CloudCannon’s roadmap is driven forward by an experienced team of devs who follow customer feedback from both developers and content managers: the people who interact with the content management system every day.

As for Régis, who’s spent the last few months putting CloudCannon through its paces, how does he feel about the process of actually transitioning clients to a new CMS? “I’m in a position to be confident; there’s not much impact on the code itself — most of the content [changes are] in config files and a few form fields, but that’s it. We’re very confident.”

Looking at CloudCannon from a client’s perspective (“stepping into the shoes of an editor”, as he puts it), Régis is particularly impressed with the UX.

Working together with CloudCannon as the CMS adds more features for developers and content editors alike, Régis and The New Dynamic team will be able to bring the best Jamstack editing to more and more people.

And with every site tND creates, and every additional content editor taking the reins of their own site, tND will be more empowered to do what they do best: research, design, and develop the best possible websites.

"The fact that you can preview links, the way that you choose your images, those kinds of things are really helpful to editors.

And when you add content to a page just like a page builder, you can click on any one of those blocks and see all of its styles and its content. That's pretty powerful.

As an overall product, it's very cool."

An agency that takes responsibility

As a Lead Developer, Régis spends a lot of his time on research and development. This includes finding new frameworks for tND’s client sites, building Hugo modules for new and potential clients, and, in the case of CloudCannon, figuring out how best to adapt sites for a new CMS to meet or surpass client expectations.

Régis spends a lot of his time working on Hugo logic for tND clients, but he also maintains HUGE, the open-source framework that allows users to make Hugo even more declarative in its configuration. Alongside these responsibilities is the popular Hugo theme Ananke, created by Bud Parr. In addition to founding the agency itself, Bud also created the influential tND community itself, where hundreds of Jamstack developers, dev advocates, and community members congregate — it’s clear that tND is a major player in the Jamstack world.

One of the core technologies that tND works with, aside from Jamstack, is Git-based content. Having multiple clients with existing sites served from Git repositories, tND depends on a Git-based CMS with intuitive editing capabilities, a reliable roadmap for the future, and excellent support.

CloudCannon offers exactly that, with dedicated support for agencies handling multiple sites, meaning fewer headaches for Régis and the tND team going forward. Régis has already found CloudCannon’s support team — led by its product developers — to be “super helpful” in their approach to feature requests, workarounds, and ready explanations, leaving him thrilled with the CMS as a whole. 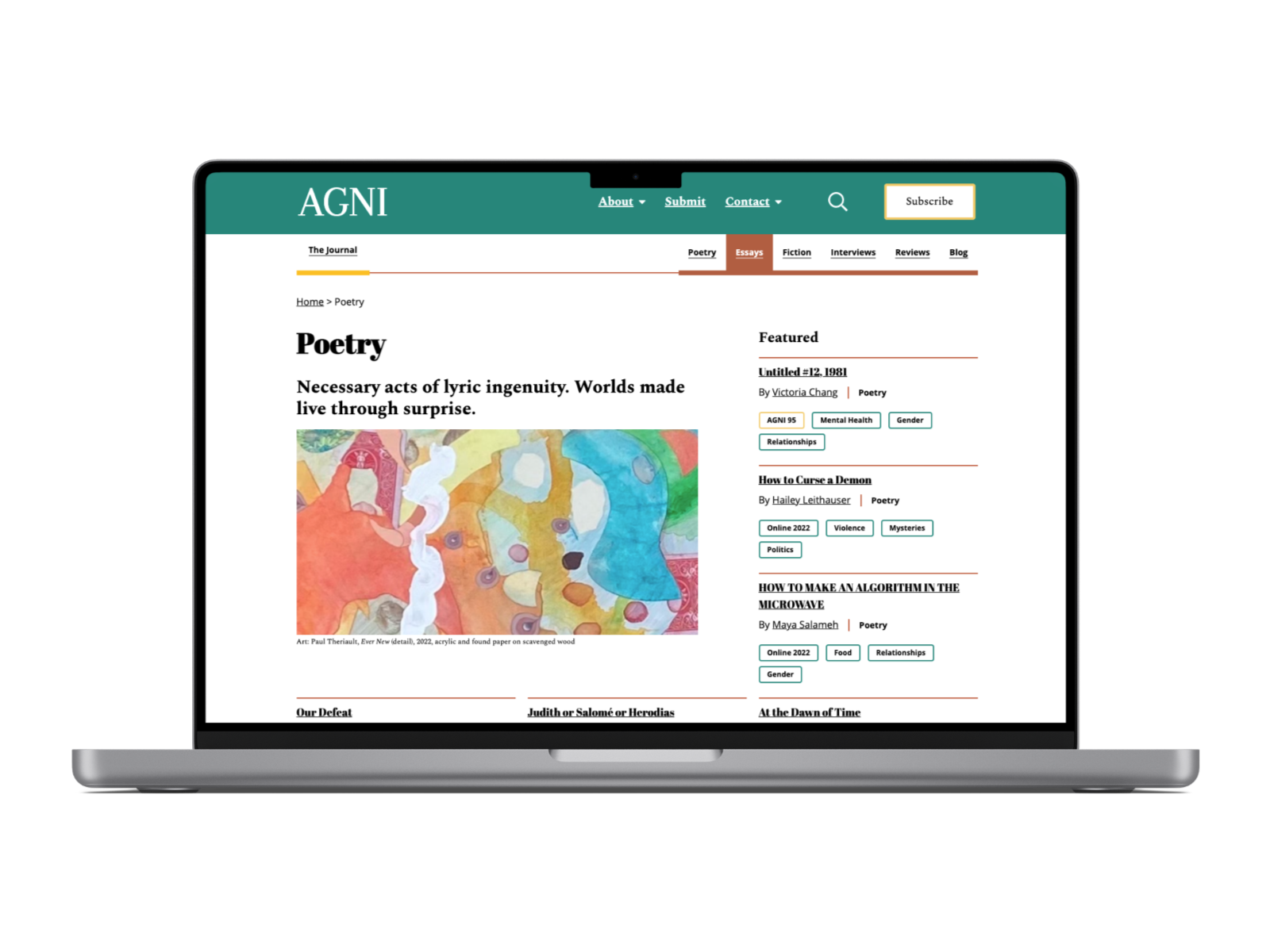 One website that Régis and tND have already moved to CloudCannon is AGNI Online, a literary journal from Boston University with a proud fifty-year history of publishing new poetry, fiction, essays, interviews and criticism — and thousands of files and site pages to show for it.

AGNI had originally used WordPress, and tND transitioned their site and its original design to CloudCannon’s Git-based CMS, avoiding the constant maintenance cycle so common to WordPress sites.

With CloudCannon’s Content Editor and tND’s efficient development, AGNI editors can easily add new content and upload new media, and they can do all of this content management themselves — without incurring additional development costs every time the contents of a new issue need to be uploaded.

And with the benefits of Jamstack — speed, reliability, and security — AGNI readers have the best possible experience.

"We’re eager to port those sites to CloudCannon, to show it to our clients, to discuss it, and get them set up. We're very happy, and I'm thrilled to have more clients seeing their sites on CloudCannon."

It’s not just multi-author magazines that tND’s looking forward to bringing to CloudCannon, either: some of tND’s clients are large financial companies, with high-priority quarterly reports and publications.

Because these companies need to make major edits to their websites on a regular basis, CloudCannon’s branching workflows for content editors are another compelling reason to make the switch.

Rather than freezing a site while the changes are being made, editors on CloudCannon are able to create their own branches for the upcoming financial quarter, and can then make, review, and approve all of their edits in one place — a private staging site.

Their existing site can then stay live until they’re completely happy with their new content. At this point they’d be able to simply publish all their new changes from their private staging site to their public production site at the precise time they wish to release their new reports — all without involving a developer.

"Our users are able to make all of their changes and see them happening on the preview that is shown by CloudCannon, without actually publishing all their changes.

So this allows them to do a batch of changes without having any impact until they hit that publish button. It's a very simple way to do it, but it's better for editors." 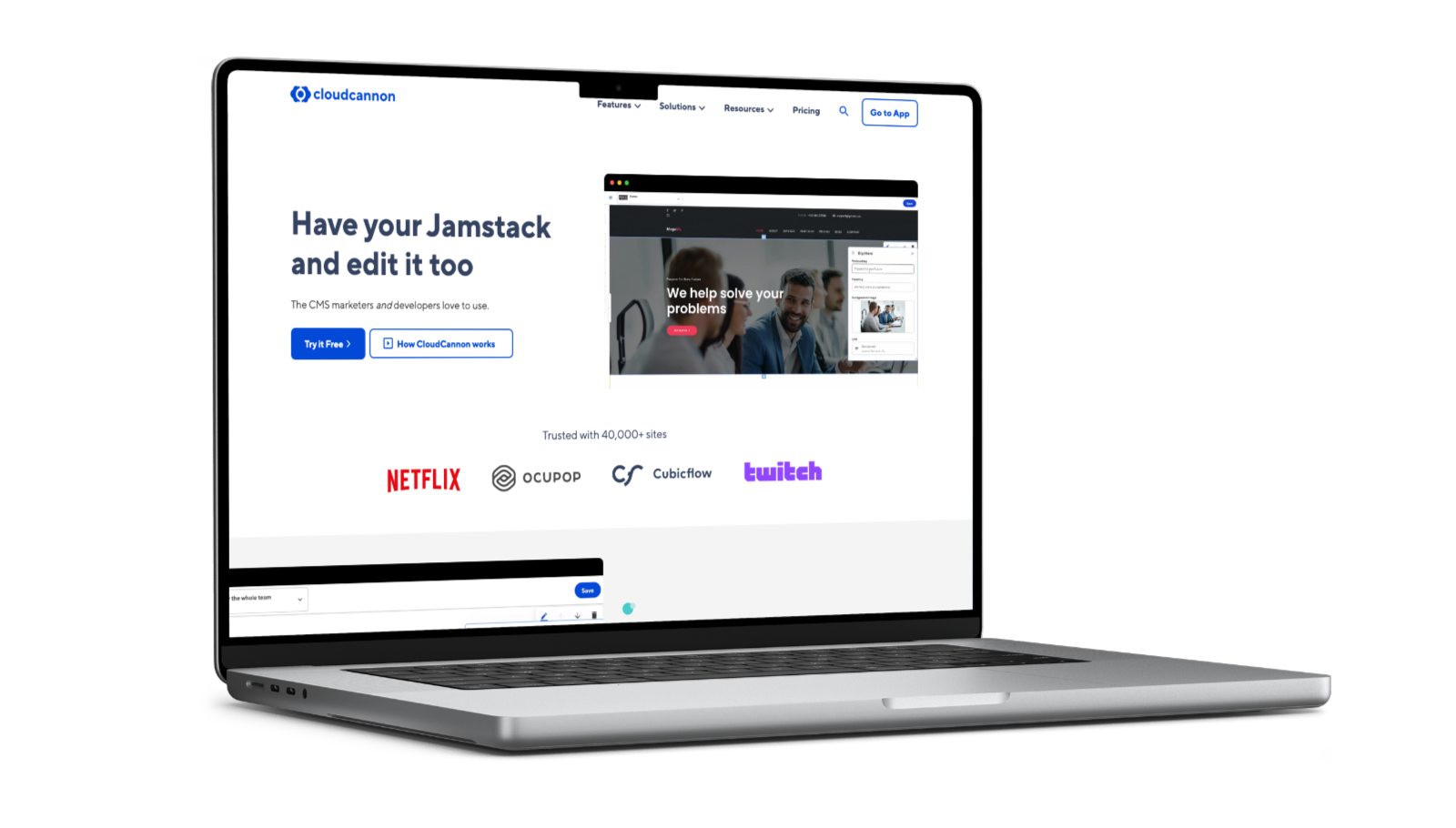 CloudCannon has recently implemented a range of features that have solidified Régis’s confidence in the CMS: from global input and schema settings to DAM support, any gaps between tND’s previous CMS and CloudCannon have been bridged.

And with the CloudCannon team consistently working on new and requested features from their users, the future looks bright for devs and content editors alike.

As a developer who's very much aware of what content editors appreciate, Régis can already see that tND’s clients are going to be very happy with their CloudCannon sites in the long term.

Learn how CloudCannon can work for you and your team

See how other teams use CloudCannon